We would like to offer our sincere support to anyone coping with grief. Enter your email below for our complimentary daily grief messages. Messages run for up to one year and you can stop at any time. Your email will not be used for any other purpose.

Share a memory
Obituary & Services
Tribute Wall
Read more about the life story of Melvin and share your memory.

CHIRCOSKI, Melvin Joseph “Chick” - It is with profound sadness that we announce the passing of “Chick” Chircoski on November 22, 2022, just 5 months short of his 90th birthday, after a very brief yet courageous battle with cancer. Left to mourn this huge loss is his wife of 63 years, Marilyn (nee Mick) and his 4 daughters and their spouses- Carol (Mark Wilson), Mary, Noreen (Chris Berlinghoff) and Tish (Paul Picard). He was predeceased by his parents Joseph (1977) and Nora (nee Newton) in 1979, his grandson Danny Wilson (2011), and his siblings-Stanley (Barbara), Norman, Clare (Frank St. James) John (Patricia), Joyce (Tom Bown), Edwina and Ronald (Claudette) and his brother-in-law and sister-in-law, Arthur and Gisele Mick. He is survived by his brother Larry and his sisters-in-law Patricia Chircoski and Claudette Chircoski.

He was the VERY beloved “Papa” of Meghan, Emma (Ian Baillargeon) Bethany (Nathan Lepage), Molly (Cavan Laferriere), Andre (Cassie Beaulieu), Emily and Alexandre. Known as their “Uncle Babe”, he also leaves behind numerous nieces and nephews that he had very special relationships with.

Chick was born and raised in Iroquois Falls, from where he strayed only to pursue his hockey career and for work as a young married man in Elliot Lake. He was Team Captain and a local legend when playing for the Iroquois Falls Eskimos. He continued to play hockey into his early 70s as an Abitibi Old Timer, where he continued to enjoy nailing a few hip checks. Chick’s #14 jersey proudly hangs above the ice surface at the Jus Jordan Arena.  Chick spent most of his working life in the “Pipe Shop” at Abitibi-Price where he enjoyed teasing and being teased by his many co-workers. He was a faithful Montreal Canadiens fan. In his spare time, he enjoyed fishing, blueberry picking, moose and partridge hunting. However, his favourite place of enjoyment was his cabin at Munro Lake where he enjoyed many years with Marilyn, surrounded by family, extended family and friends.

At this time, the family would like to thank the following: Dr. Bruno for her endless care and compassion the outstanding doctors, nurses and PSWs at HSN in Sudbury, the VON Nurses, AGH nursing staff, nieces and nephews who willingly trained to provide daily injections and most importantly the New Circle Place neighbours for their continued love and support for Chick through this last leg of his journey.

At his request, there will be no visitation. His ashes will be laid to rest overlooking Munro Lake in the Spring. In lieu of flowers please send donations in his memory to a cause or charity of your choice.

To send flowers to the family or plant a tree in memory of Melvin Chircoski, please visit our floral store. 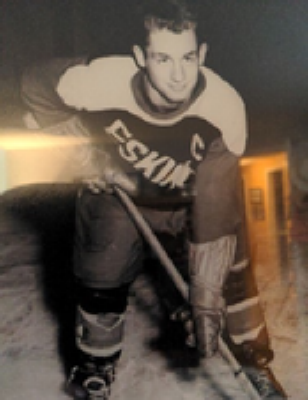 In Loving Memory Of

Look inside to read what others have shared


Family and friends are coming together online to create a special keepsake. Every memory left on the online obituary will be automatically included in the book.

You can still show your support by sending flowers directly to the family, or by planting a memorial tree in the memory of Melvin Chircoski
SHARE OBITUARY
© 2022 Irvine & Irvine Funeral Home. All Rights Reserved. Funeral Home website by CFS & TA | Terms of Use | Privacy Policy | Accessibility